When you say, “Men are just like that, or women are just like that”, you’re stereotyping, not telling the truth. When you make overly generalized pronouncements about your partner, you actually are dismissing him or her. Why do you want to do that? Because you’re trying to figure out your relationship dynamics, but being gender-specific is not how to save a relationship. 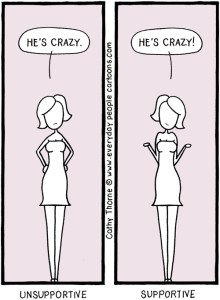 All long-term couples, no matter their sexual orientation, have the same relationship issues. In other words, you don’t have problems because you and your partner are different genders.

Are men and women so different?
Of course, there’s the biology. Brain research however, is also discovering that men and women’s brains function differently. They don’t even look identical! In spite of that, studies show that the differences between genders really depend on acculturation and upbringing.

When I get angry with my husband, if I say, “You’re just like all guys…” he can’t hear the specifics of what I’m trying to tell him because he’ll have to defend his maleness. If my husband chides me by saying, “You’re acting like all women do…” his deprecating remark is neither constructive nor reconciliatory. And, I can’t hear what he has to say because I’m too busy being defensive about my gender.

Catch yourself when you start concentrating on your partner’s gender. Gender prejudice and bias play a part in your life, just as racism and classism do. But, do you nurture your racist and classist tendencies, or do you try to mitigate them? Racism, classism and sexism all have something in common: They thrive on dehumanizing and categorizing individuals as “other”.

Many long-term couples suffer from these sweeping generalizations about each other’s gender. With a counter-culture approach, you can begin to put an end to the battle of the sexes in your own relationship. The more you and your partner can remember that you are human beings, the better you’ll get along.

You are both from planet Earth, not from Venus and Mars.

This is how to save your relationship: Your partner is an exception to the stereotype you are holding in your mind and heart. Don’t discount him or her – or ever lose site of the individual that your partner is… regardless of his or her gender.

The next time you get together with friends, notice when the conversation turns to male or female bashing.
We all have a propensity to do it, and it can even be humorous. Many times people aren’t aware of the negative impact of these comments. One way to defuse gender discrimination is by not participating in it.

What is the worst gender stereotype that you have heard?