You actually can’t be human in a relationship without hiding something about what you do/did or who you are/were. It’s a natural instinct. Hiding is how we humans survive.

Recently I saw the movie, August: Osage County. The story is about a highly dysfunctional family that is tormented by secrets and lies. When I got out of the theatre, I realized that the movie is actually a depiction of every family.

How does hiding out, telling half truths manifest in your life? 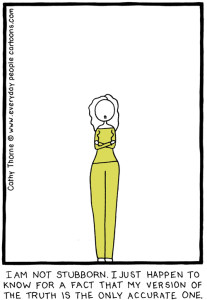 Did you know that researchers have discovered that humans tell about four lies a day! Are you having a clandestine affair or have you had one in the past? Are you honorable in your daily actions, i.e. being punctual, walking your talk, etc.? Do you make excuses about your poor behavior? Are you an addict — alcohol, sex, drugs, work, etc. — and don’t admit that you are?

We all lead soap-operatic lives. Often the secrets are sexual ones. Perhaps you had a long-term affair with your sister’s husband or your brother’s wife. Or, maybe you’re lying about how you spend the weekly budget money because you don’t want to hear your partner’s admonishments. Deception and duplicity, however, do take a toll on all involved. Every family deals with dishonor or shame of varying levels.

You might think that your relationship is free and clear of shame, dishonor, deception, and duplicity; these are harsh accusations. You might not be an addict or an adulterer, but aren’t you guilty of telling little white lies of pretending or not telling the whole truth?

What can you do about your toxic treasure trove of secrets and lies?

Write them down and say what you’re willing to do about each of them whether they’re small or big. Some of them you can do something about right away; others can wait. It doesn’t mean that you have to have a truth-telling session with your partner. It means you have to tell the truth to yourself. Once you do that, you’ll know what to say or not say to your partner.

This is a cathartic opportunity to cleanse yourself and your relationship. You have to face your fears to be released from your shame. Get professional help to go through this courageous process if you need it.

Don’t forget to NOT beat yourself up because lying and hiding are part of the human condition. What you’re trying to do is be conscious of this less-than-honorable behavior that damages you and those whom you profess to love the most. Once you can admit that you’re doing something that’s not serving you or others, you’ll be able to do something about it.

Sweeping relationship toxicity under the rug is not possible forever; it always surfaces. You can’t successfully hide from yourself because life is asking you to be the best and most enlightened human you can be. Do more than survive — THRIVE!

Clean it up by starting small

I’m cleaning up, detoxifying my relationship on a regular basis. For example, it took me decades to stop doing this childish behavior. I’m actually ashamed to admit that I did this for for so long. This is what I’d do — I’d tell my husband that I’d be home at a certain time and then return home much later. I wouldn’t call and tell him that I’d be late. I’d just come back home whenever I wanted to.

Why didn’t I tell him that I didn’t know when I’d be home and not to worry about me? Was it passive-aggressive on my part? I didn’t have a history of my parents or my husband getting angry with me for returning home later than expected. My husband actually never made a big deal about it except to say that I should have told him the truth — and he was right. When I finally stopped doing this, I felt like an adult! How can you clean house in your relationship? It’s going to get dirty again and again, but you’ve got to clean it up once in a while.