All humans are at least a little bit selfish because we want what we want. How we go about getting what we want puts us on a narcissistic continuum.

When it comes to relationships, it’s important to know where you stand on the narcissistic spectrum. If you were raised by a narcissistic parent, you probably will perpetuate some narcissistic tendencies. It’s impossible not to, but you can also mitigate them. 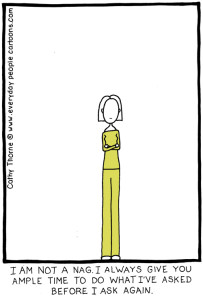 Charisma, charm, the life of the party, the bon vivant — these are often characteristics of narcissists. Beware! But, it’s impossible to be vigilant when one of your parents is like this. Everyone adored my Dad because he made you feel great, but the underbelly of the narcissist is lying. One of his narcissistic habits was his lack of punctuality. Whenever he’d make an appointment, he was always at least half an hour and usually an hour or more late. He never once cared that he’d wasted someone else’s time. He was busy doing what he wanted; that’s all that mattered.

Here’s an example of how narcissism played out in my relationship:

My husband has been complaining for decades about my habit of going to bed after midnight. He likes to go to bed earlier than I do, and because he’s a light sleeper, getting a good night’s sleep isn’t easy for him. I always wake him up when I finally come to bed, and he can’t fall right back to sleep. I, however, sleep like a rock. We’d have our usual annual arguments about what time to go to bed. I’d change for a while and then go back to what worked for me. It wasn’t until I was writing this blog that I realized that I really didn’t care about my husband’s grievances. I only paid lip service to them. I just wanted to do what I wanted to do — which is to stay up as late as I wanted. When I realized that I had complete disregard for his feelings in order to get what I wanted, I changed my behavior immediately. I’m in bed by 11 PM now whether I want to be or not. Why? Because it’s narcissistic to get what I want at the expense of my husband.

We learn a great many things from our parents — good and bad. It’s hard to be aware of how we’re manifesting our parents’ behaviors in our own life. Can you examine your relationship to see if there’s any narcissism there that you’d like to eradicate? It’s never too late. For me, it’s been a huge relief to have resolved our marital bedtime issue.

If you are doing anything at the expense of your partner, can you stop that narcissistic behavior?
I changed my behavior because I didn’t want to be a person who didn’t care about my husband’s feelings just to get what I wanted. If you don’t value narcissism as a way of being, you’ll have to do something different, too. What could that be?